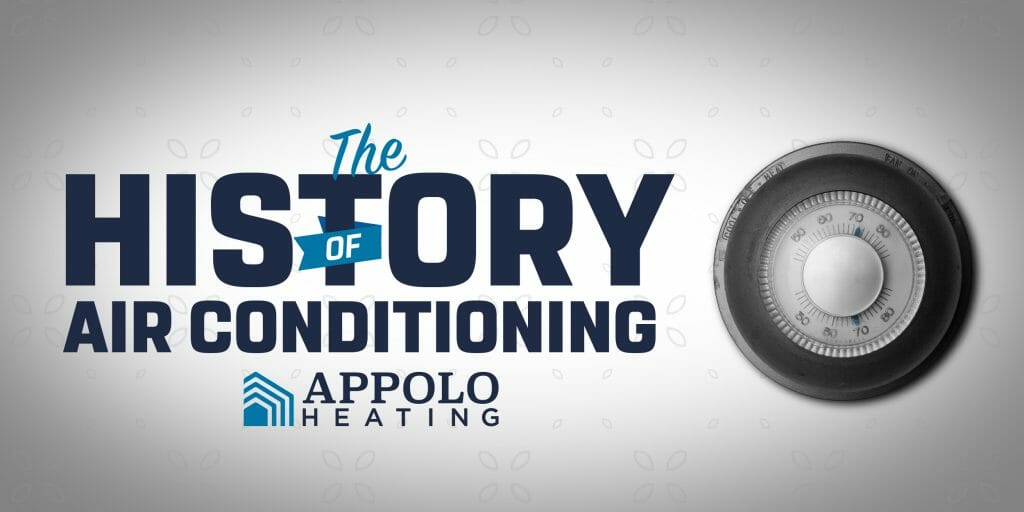 While sitting in a nice, cool air-conditioned room on a scorching hot summer day, you’ve at some point probably thought about how brutal those hot days would be without air conditioning. But in the grand scheme of things, air conditioning has only really been in widespread use since the late 1960s, which means a lot of people were relying on fans and praying for a cool breeze during those almost intolerable heat waves until only a few decades ago. So what were people doing before air conditioners, and how long did it take for them to become mass-produced to the point that they were in nearly every American home? There’s only one way to find out; let’s take a look at the history of air conditioning!

True attempts at escaping the heat through unconventional means allegedly started in Ancient Rome, when wealthier Romans had cool water circulated through their walls in an attempt to fight the heat. A short-lived Roman emperor by the name of Elagabalus even tried something very unconventional; one summer, he had a mountain of snow imported from the nearby mountains and plopped it into his villa garden in an attempt to keep cool. This was not only a grotesque exploitation of his power but was also, naturally, completely ineffective; the snow, of course, quickly melted.

Serious attempts at fighting cold temperatures disappeared after the Romans and didn’t pop up again in any significant way until early-20th century America. The catalyst for these renewed attempts? Electricity. An engineer by the name of Willis Carrier was tasked with finding a way to reduce humidity at a Brooklyn publishing company; the humid conditions were causing magazine pages to wrinkle up, which was bad for business. At some point in searching for a fix to the problem, Carrier came upon the idea to use cooling coils to cool down water, and through trial and error, discovered he could then evaporate that cool water and distribute it throughout a space to make the area cool. Just like that, the modern air conditioner was born.

By the early 1920s, air conditioners were in relatively wide use, for the most part in public spaces like theaters and work environments that were exceptionally hot; this was largely because the cooling units were still very large and expensive, making personal use unrealistic. This remained the case through the 1930s and much of the 1940’s; although smaller units had been introduced to the market, their price made them an appliance limited to only the very wealthy.

This all started to change in 1947, when an engineer by the name of Henry Galson made an air conditioner that was smaller in size and more affordable in price, which ultimately led to the sale of roughly 43,000 AC units. By the late 1960s, many new homes were being built with central air already installed, and the smaller window units that are still popular now were becoming more and more affordable. Fast forward to today, and, according to the US Energy Information Administration, nearly 100 million homes in the United States have air conditioning in some form or another, which accounts for a whopping 87 percent of all households in the country. That’s a far cry from the 43,000 units that Galson’s air conditioners sold in 1947; it’s truly an extraordinary growth for a product that was in limited use only a handful of decades ago.

What Does This Mean For Me?

Well first off, there’s a pretty good chance that you have air conditioning and considering how quickly the AC technology can change, it’s a safe bet that you’re going to want an HVAC company that you can trust that stays on top of all the latest trends and technology; that’s a surefire way to make sure you’re getting the most out of your AC system, both in cooling capability and in energy costs. This is doubly important with the rise of more environmental consciousness; rules and regulations to help reduce the environmental costs of air conditioning are constantly changing, and you want to be sure you’ve got reliable industry insiders on your side so that you don’t fall behind.

That’s where Appolo comes in. We make it our priority to provide the best and most modern service possible, which ensures that your system isn’t just running smoothly and efficiently, but also safely. Whether you’re looking to install a brand new system or just want maintenance on an existing one, we’ve got options for that and everything in between. Plus, with over 50 years of experience in HVAC, we’ve been around just about as long as air conditioners have been widely installed in homes, so you know that we know our stuff. We’ve got the history, but still, always have our eye toward the future. Now that you have a little AC background of your own, check out the rest of our blog; it’s always good to know a little history, but getting to know the nuts and bolts of your HVAC systems will make you more aware when something is off. That way, you’ll know when to contact us.